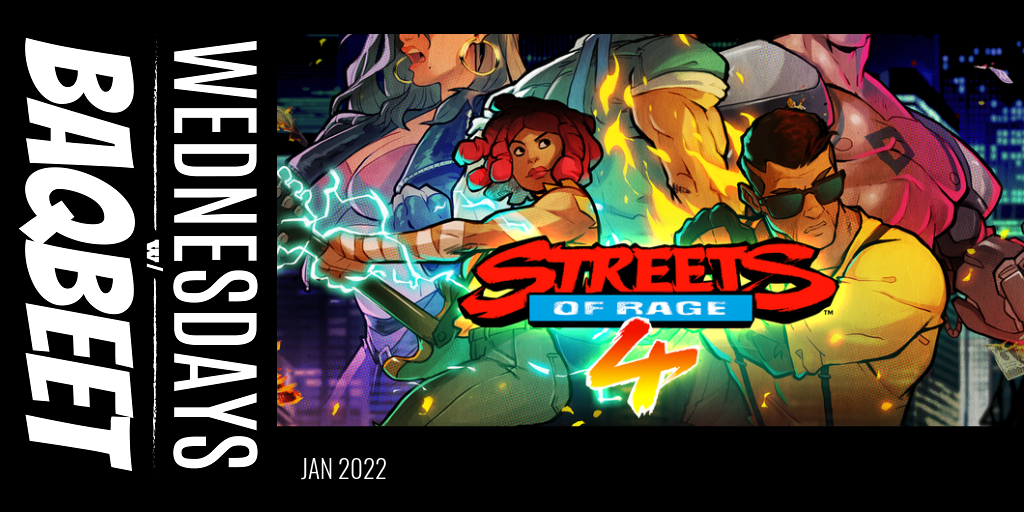 How Good Is Streets Of Rage 4?

Streets of Rage 4 receives a solid 3 out of 3 BaqBeet Ranking.

If the answer is yes, then this blog is for you! Most Wednesdays, our time is accounted for due to being actively at work, especially since the post-Covid-era began. To kill some downtime, there is little that can compete with a solid day of gaming. Few would agree, most can understand and many can’t relate. And that’s TOTALLY fine. But let’s face it, SOMEONE in your life likes video games in some shape or form. (Or at least plays video games and doesn’t realize it. Another discussion.) Today, we talk about none other than Streets of Rage 4 (SOR4).

A side-scrolling-beat-‘em-up game released in April, 2021 on multiple platforms, including Nintendo Switch. Mr. X Nightmare, the DLC for the title, was released three months later in July 2021. If you wish to find out more details about SOR4, check out the Presskit available on the official SOR4 website.

WHERE DID THE HYPE COME FROM?

Being known as one of Sega’s more popular arcade brawlers, the release of this title came with a bit of hype. So far, SOR4 really lives up to the name. Great gameplay that’s damn near identical to the previous titles of Streets of Rage coupled with the variety of characters available makes for many hours of replayability.

The first play through was a bit rough to get used to. As I spent the first few attempts being defeated on the first stage, I quickly learned that this game HEAVILY rewards aggressive gameplay.

*For those of you who rely on defensive gameplay, this title might teach you a thing or two about offense being your best defense.*

Run after run, the controls were starting to click and the combos were multiplying. Before long, I’d completed all 12 stages in my first complete run through Story Mode.

Each boss encounter was annoying, until I learned the bosses’ patterns. This is something that doesn’t surprise the casual gamer. But like most side-scrolling-beat-‘em-up-games, the toughest part is to preserve your health gauge until you conquer each wave of foes and grab that grub.

SUMMARY OF INITIAL PLAY THOUGH

Survival Mode: Mr. X Nightmare DLC
Even if the temptation to jump right in is great, It’s recommended to start SOR4 by going through Survival Mode. Completing various waves of Survival Mode will let you unlock new abilities for each fighter. Although, each of the characters from SOR4 have plenty of moves in their arsenal to begin with.

Training Mode
Going through Training Mode with each character before a run really helps to get familiar with that character to get fresh on the battlefield. This mode helped me to conceptualize how to prioritize certain moves in certain situations. Aside from in-game experience and online tutorials on the fighters, Training Mode gives you the best chance of using each character as thoroughly as possible.

UPCOMING FOR Streets of Rage 4:

Looking forward to a Mania+ run at some point. (Like the caption says, I must be NUTS to be going for this.) But when it comes to these types of games, I am a bit of a glutton for punishment. I mean, the payout is SO satisfying!

UNTIL NEXT TIME…
CATCH WEDNESDAYS W/ BAQBEET
Tune in on Wednesdays.
BaqBeet.com